What is Bitcoin Cash (BCH)?

Bitcoin cash (whose acronym is BCH and rarely BCC, BCHABC or BAB in some trading platforms) is a cryptocurrency similar to Bitcoin, which was created on August 1, 2017. It is a Bitcoin fork, that is, the two cryptocurrencies share some common characteristics, but have operated on different blockchains since their separation.

Bitcoin Cash is the result of a community split that follows the debate on Bitcoin’s scalability, that is, how the network should scale to accommodate user demand.

Two parts of the community each had their own opinion on this, resulting in two different projects: one part, largely dominant, wishing that most of the economic activity would take place outside of the main blockchain. so that the network remains as decentralized as possible (Bitcoin); another, smaller, that believes that the chain of blocks can accommodate a large part of the transactions while remaining sufficiently decentralized (Bitcoin Cash).

Like Bitcoin (BTC), Bitcoin Cash (BCH) aims to become, as stated in the white paper, a decentralized, peer-to-peer electronic money, operating without a central bank or third party.

Bitcoin Cash would effectively follow Satoshi Nakamoto’s vision for Bitcoin while it still existed, that is, an expansion that would take place primarily on the blockchain.

Bitcoin Cash is nonetheless a highly controversial project due to its contentious nature that runs counter to the general opinion and dishonest methods used by some of its supporters. In terms of price, Bitcoin Cash today represents a small part of that of Bitcoin: around 5%.

Why did Bitcoin Cash appear? (BCH)

The number of Bitcoin transactions has been on the rise since its inception in 2009. Since 2017, the Bitcoin network, however, has had difficulty processing these transactions and is regularly congested. During transaction spikes, it often takes several hours for a transaction to be confirmed, or else high transaction fees speed up the process.

In December 2017, at the height of the last cryptocurrency bubble, the average fees exceeded $ 30 per transaction.

Why these delays? By design, the blocks on the Bitcoin blockchain are limited in size to 1 MB. Every 10 minutes a block is extracted.

One of the solutions to this problem is to increase this cutoff value, as predicted by Satoshi Nakamoto in 2010. But, the centralization of the network caused it to lose approval within the community. A debate about scalability raged for years until it culminated in the irreversible separation between Bitcoin and Bitcoin Cash in 2017, which was effectively sealed by the cancellation of SegWit2X in November 2017.

The Bitcoin community has been divided into 2 camps:

What happened to the fork of Bitcoin and Bitcoin Cash?

The fork between Bitcoin and Bitcoin cash held on August 1 at block of 478,559. By increasing the block size limit to 8 MB, the implementation of Bitcoin Cash caused a hard fork of the Bitcoin blockchain, that is, a duplication of the chain in two separate chains: the only one following the old rules (BTC ) and the adopter of the new rules (BCH).

This fork bears the somewhat obscure name of “User Activated Hard Fork” (UAHF) in reference to the “User Activated Soft Fork” (UASF) which wanted to push the Bitcoin network to adopt SegWit during the same period. 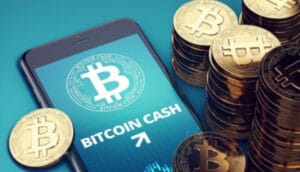 The two resulting channels Bitcoin and Bitcoin Cash, so they share the same history before August 1, so if you had a BTC wallet on the fork, you must have the same BCH number at the same address.

Whether an exchange will hold your bitcoins for you depends on their policy. If you supported forking, then it would credit your BCHs directly to your account or allow you to withdraw them. It is also possible that she did not support him and that he maintained his BCH against his will.

Please note that Bitcoin Cash has implemented replay protection (replay protection), which makes them incompatible channel-to-channel transactions and thus prevents malicious actors from replaying to seize funds from others.

What are the characteristics of Bitcoin Cash (BCH)?

Since Bitcoin Cash is a fork of Bitcoin, it shares a number of characteristics with it, in particular:

What is Bitcoin Cash (BCH)? Origin and characteristics