The biggest reason that has allowed cryptocurrencies to exist in conjunction with traditional finance, is the growing number of users worldwide who were presented with savings alternatives, payment platforms or investment instruments that were not previously available, be it due to lack of availability in your region or because you do not even have access to bank accounts to manage daily expenses. For this, the participation of the state has generated policies for the application of taxes, identification of users, prevention for money laundering, among others; This has paved the way for large-scale adoption to be presented as an achievable goal on the road ahead of digital assets.

It cannot be doubted that bitcoin continues to be the largest and best known cryptocurrency worldwide, the market capitalization that places it at more than USD 878 billion is capable of nearly doubling its second contender, however, the Opportunities presented through the exchange of Non-Fungible Tokens (NFT) in conjunction with Decentralized Finance (DeFI), appears to be reversing the investment appeal of conventional fund managers. And it is that as we explained in the article of why the growth of DeFi points to being 100 times bigger than what is currently known, the combination of venture capital companies with which large technology companies are the ones that allow for more resources to develop these products and find space to grow.

Graph that represents the amount of money invested in decentralized protocols within Ethereum, the amount in Staking and loan liquidity is included. Source: DefiLlama.

One of the main problems that Bitcoin faces with respect to its inclusion in the traditional equity market, is that it is designed to supplant the old conceptions that are had with fiat money, which would mean taking the entire economic system that we currently know, towards a disruptive destiny that society has not yet validated as necessary. Regarding this issue, the co-founder of one of the first and largest debate communities on bitcoin in Venezuela comments us the following:

“The purpose of bitcoin is to decentralize the exchange of value, addressing the trust risk associated with fiat money transactions. Despite having these characteristics, it does not seek to be able to offer a profile to traditional investors to break into that market. That is why Michael Saylor with MicroStrategy has been successful, it allows for a bridge between the traditional and the disruptive, in order to bring bitcoin closer to the conventional. Although bitcoin is based on the premise of a real asset, it does not move in the same way as usual financial instruments. “ Javier Bastardo, administrator at Satoshi in Venezuela.

Despite 2021 has been the year in which public companies showed the greatest interest in participating in the asset, it was not made with a compromise that at least has come to understand the importance of managing private keys. This allows us to understand that the participation of investment funds was not conditioned by the meaning of the value proposition, rather, by the pursuit of the performance offered in pursuit of new all-time highs.

Regarding the knowledge that both conventional users and mutual fund managers should have, Bastardo did not assert the following:

“That still means that Bitcoin is an asset for everyone, both for the expert user who manages his own private keys, as well as for the one who only has a password to enter a centralized platform.”

Going to the basic understanding of the differences between Bitcoin and Ethereum, the aim of the latter is not to become the standard of use for the world’s monetary reserves, instead, to offer developers access to code that can be validated by the conditions that are proposed for its use. This would mean, programmable agreements that present conditions that cannot be altered, and that in addition, their purpose of use is valid through the implementation of tokens generated in the network. This idea is what has allowed us to have access to decentralized platforms, where the acquisition of assets is not determined by a central entity, but by the agreements between parties that are reached by users such as the Axie Marketplace, Bored Apes or applications specialized in the loan of cryptocurrencies.

It is then that for common users, the idea of ​​practicality of this type of protocols is actively digestible, since they are presented as well-known arguments such as that of consumer banking that includes the application of loans and credits, achieving that the clients of these services can make use of them without the restrictive limitations of credit history, identity or even that said product is available in a certain region. The latter has been possible thanks to the adoption that stable cryptocurrencies have had, making way for all the currencies of the world to find refuge in the decentralized ecosystem, aspiring to become the banks of the future. 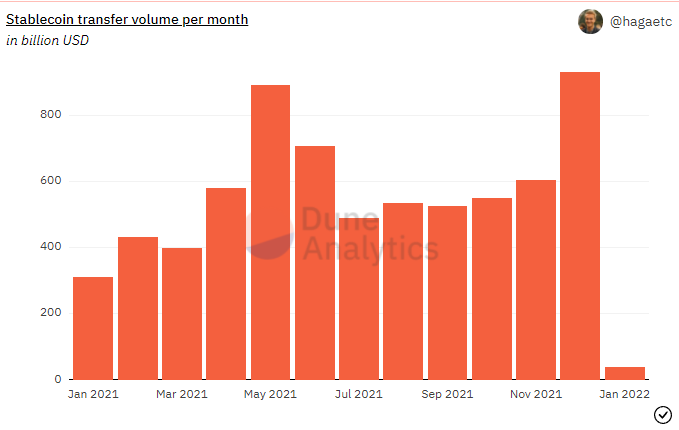 Graph that represents the amount of money in volume transferred in stable cryptocurrencies. Source: DuneXYZ.

One of the most significant problems, which keeps large investors from participating in Bitcoin beyond the acquisition of ETFs in the stock market, could be found in the variation of volatility that the price of the asset generates on a daily basis. Although all cryptocurrencies with an exchange rate that is not linked to any tangible asset, suffer from these abrupt changes in price, when a cryptocurrency has a utilitarian purpose in a service that is presented as necessary, that exposure to volatility is reduced. This is the reason why we presented that while the price of bitcoin was struggling to overcome the barrier of $ 50,000, several DeFi products were yielding above 10% in the same time frame.

Another sample that allows us to visualize where the interest of entrepreneurs linked to Wall Street is, can be found in the investment that venture capital has placed as a growth bet, with an investment of USD 30 billion for entrepreneurs based in decentralized technology. And this is because bitcoin does not offer forks that change its original concept, the development product that we have today does not derive from the initial value proposition that users want to maintain in the long term. Despite this, this condition should not be taken as a negative implication, since there is a revolutionary loyalty association for the creation of a new economic system. 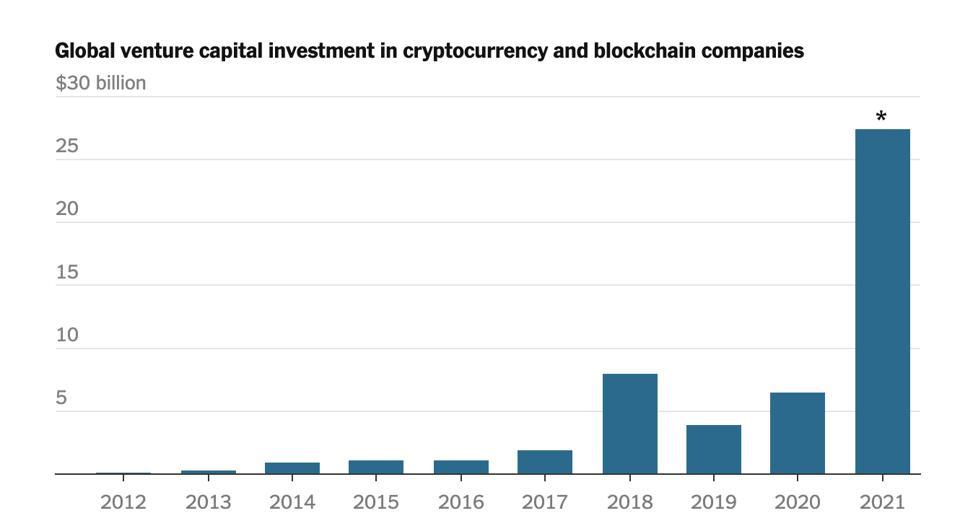 Graph that represents the amount of money invested through Venture Capital or Venture Capital in companies linked to the development of software and cryptocurrencies. Fountain: Forbes.

Now, the proposals based on Ethereum and concepts such as Web 3.0, can be used by any entrepreneur with knowledge of software development, devising within the chain, proposals that have not even been thought by the creator of the Vitálik Buterin protocol, such as We could appreciate from the comment that the creation of NFTs is something that was never foreseen within the ecosystem. It is then, that it can be thought that the greatest attraction that will be generated with all the cryptocurrencies linked to the development of smart contracts such as Solana, Avalanche or Fantom (to take into account that although Ethereum is not currently the most economical protocol in terms of transaction fees, it is the one with the highest capitalization in the market) is the availability of offering financial services focused directly on the consumer who needs them, thus attracting more users who did not see interest in cryptocurrencies, to participate in the sector. It seems that seeing the king of cryptocurrencies dethroned is something that will not happen shortly, however, if the usefulness of this type of decentralized applications becomes more common to implement than the mechanisms offered by traditional finance, it is It is only a matter of time for the market to pivot towards where the greatest amount of money is available, and for that to attract the greatest number of users.

If bitcoin is presented as digital gold, despite the fact that everyone knows its scarce value and that it is a means of exchange that offers value. How many people actually have these types of assets in their position? On the other hand, if what aspires to replace smart contract cryptocurrencies such as Ethereum are the products offered by traditional banking, even going to people who need but have never accessed this type of services How many people have a bank account? This question is the one that could argue who could get the throne of the king of the decentralized world.

Bitcoin vs. Ethereum: Which Cryptocurrency Will Remain King of the Decentralized World?